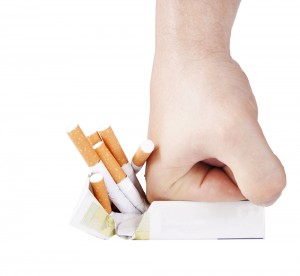 Smoking has long been known to be detrimental to your health as well as those around you. It is a difficult habit to break, some companies will offer you nicotine patches, chewing gum, tablets, all sorts of different stuff. However hypnosis has been proven to be one of THE most effective therapiees on the market. Some hypnotists will work on their clients using suggestion hypnosis only. However by using advanced hypnosis I will find out where your subconcious is gaining its ‘satisfaction link’ from and redirect that satisfaction link elsewhere, to stop any cravings. I will also use a suggestion script that will help you further. Most people assume that when they stop smoking they will put on weight or become ‘moody’ or aggresive. In some this becomes a self fulfilling prophecy, because they already believe it is going to happen, it will happen. I can change the way your subconcious views this so that weight gain/anger do not become options.

Tobacco smoke contains more than 4,000 chemicals, many of them known poisons.

Nicotine and carbon monoxide play a role in the process leading to heart and blood vessel disease. Tar in tobacco contains dozens of chemicals that cause cancer.

Smoking adds to the artery-clogging process that can lead to heart attack, stroke and peripheral vascular disease. It also overworks the heart and reduces its oxygen supply, makes clots more likely to form in blood vessels, and increases the risk of potentially fatal changes in the heart beat.

Doubles the risk of heart attack;

Doubles the risk again if you have high blood pressure or high cholesterol;

Increases the risk of heart attack 10 times in women using the contraceptive pill;

Doubles the risk of stroke;

Increases the risk of gangrene by more than five times.

Passive smoking is especially risky for children and babies. It can cause the following:

Smoking has been shown to have harmful effects on all parts of the digestive system, contributing to such common disorders as heartburn and peptic ulcers. It also increases the risk of Crohn’s disease and possibly gallstones. Smoking seems to affect the liver, too, by changing the way it handles drugs and alcohol. In fact, there seems to be enough evidence to stop smoking solely on the basis of digestive distress.

Fifteen years after stopping smoking the risk of heart disease is about the same as if you had never smoked.

There are short term economic and health benefits of smoking cessation both in terms of money saved on medical costs and CVD events avoided.

Cigarettes are one of few products which can be sold legally which can harm and even kill you over time if used as intended.

Currently there are ongoing lawsuits in the USA which aim to hold tobacco companies responsible for the effects of smoking on the health of long term smokers.

Benzene (petrol additive)
A colourless cyclic hydrocarbon obtained from coal and petroleum, used as a solvent in fuel and in chemical manufacture – and contained in cigarette smoke. It is a known carcinogen and is associated with leukaemia.

Ammonia (toilet cleaner)
Used as a flavouring, frees nicotine from tobacco turning it into a gas, found in dry cleaning fluids.

Tar
Particulate matter drawn into lungs when you inhale on a lighted cigarette. Once inhaled, smoke condenses and about 70 per cent of the tar in the smoke is deposited in the smoker’s lungs.

Nicotine (insecticide/addictive drug)
One of the most addictive substances known to man, a powerful and fast-acting medical and non-medical poison. This is the chemical which causes addiction.

Carbon Monoxide (CO) (car exhaust fumes)
An odourless, tasteless and poisonous gas, rapidly fatal in large amounts – it’s the same gas that comes out of car exhausts and is the main gas in cigarette smoke, formed when the cigarette is lit. Others you may recognize are :