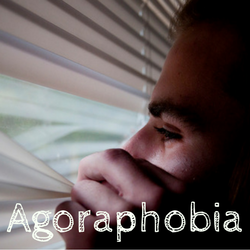 Many patients who have agoraphobia have it as a result of a panic disorder. Agoraphobia is a fear of places or situations where a panic attack may occur. People with agoraphobia avoid being out alone. They typically avoid going to the supermarket, travelling, being at heights, in elevators or tunnels or crossing open fields. Many patients even experience panic when they are asleep.

Most people have felt anxious at times. When someone suffers a panic attack, they have such high levels of anxiety, it can feel similar to a heart attack. During a panic attack you may have physical symptoms including; shortness of breath, tingling sensations, ringing in your ears, a sense of impending doom, trembling, a feeling of choking, chest pain, sweating and heart pounding.

What are the causes of panic attacks and agoraphobia?

In early human evolution, many situations that can trigger a panic attack were truly dangerous. For example, public places might have brought our ancestors in contact with hostile strangers. In any given year, some 30% of the general population will have a panic attack. Those people who don’t interpret their panic as a signal of danger or illness will not go on to develop panic disorder and agoraphobia.

Panic attacks are usually activated by stressful situations such as leaving home, relationship conflicts, surgery, new responsibilities or physical illness. The person, therefore, starts developing “hypervigilance” (they focus excessively on physical sensations), which can result in an increase in the sensations and worry. This, in turn, may result in a full-blown panic attack. The person may then develop anticipatory anxiety (fear that panic attacks will continue to occur) and begins to avoid situations that give rise to such anxiety. Once avoidance becomes widespread the person has developed agoraphobia. The person’s world may become smaller and smaller as they increase their avoidance behaviours and although they may not be experiencing a panic attack, they often live in constant fear of the next occasion when they have such an attack.

Panic disorder and agoraphobia are not related to deeper psychological problems. You may become depressed and self-critical because you have a panic disorder but panic in itself can be treated effectively without long-term therapy which explores your childhood experiences.

How can hypnosis help?

Hypnosis is a wonderful cure for agoraphobia.  Firstly we will use a technique known as coping to mastery where you will mentally rehearse situations then we will access your subconscious and find which part of your mind attains a ‘satisfaction link’ from your fear and redirect that link to a more beneficial area. There was at some point a very good reason for why you didn’t want to go out at some point, that reason may be gone now but the mind still reacts with fear at the thought of going out.  It’s a matter of re-educating the mind to realise that it IS safe to go out.